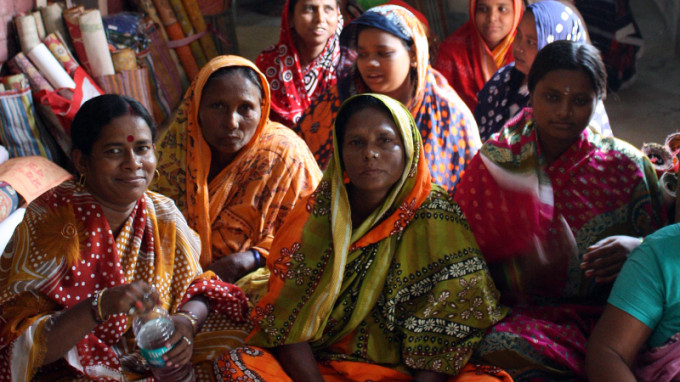 The Patua, Bengali for “leaf”, are traditionally painters and storytellers, authors of strips of paper on which they depict episodes of Hindu and Muslim scriptures, or illustrate village legends and events; but nowadays, they also relate worldwide sensational news events.

The Singing Women are members of the Patua community which settled in the village of Naya, about 150 km from Calcutta.

The Patua were originally Hindu and belonged to the lower castes, but during the Mughal Empire (1526 -1857 CE), to gain more respect most of them converted to the Muslim faith.

However, since their works depicted episodes from classic Hindu poetry and represented the human figure, they were considered contrary to the Muslim religion.

No longer Hindu and rejected by the Muslim community, a group of Patua settled in West Bengal and took on the epithet Chitrakar, which means “painters and creators of pictures”. Subsequently, most Patua adopted Chitrakar as their surname. Today, the Chitrakar are mostly Muslims and coexist peacefully with the few remaining Hindus.

In recent years, most of the village women have become painters-singers and, through their work, these women have achieved economic and social emancipation.

The idea of creating an exhibition of Scrolls stems from a “first contact” with these unusual works while visiting the 2009 Lisbon exhibition held at the National Ethnology Museum.

Hence the desire to present the Singing Women of West Bengal also to the Italian public.

These original paintings intrigued us both for their manner of recounting a story and for the immediate expressive impact in communicating not only everyday life scenes but also recent worldwide news events, using a powerful and universal visual language. Moreover, they also reminded us of our own tradition of Italian Storytellers.

For the first exhibition, organised in 2012, SINGING PICTURES. THE SINGING WOMEN OF THE INDIAN TRADITION, held at WOW Museum-Comics Space of Milan, we favoured the works of women artists since they address, in a truly authentic and touching manner, some of the issues and problems that women have to face the world over.

Banglanatak is an Indian social enterprise, headquartered in Calcutta, working across India with a mission to foster fair and sustainable development of Indian communities through Cultural Heritage.

The organisation is also consultant to the UNESCO Cultural Heritage Commission.

The fostering of Patua art and, therefore, of the Singing Women of West Bengal is part of Banglanatak’s Art for Life (AFL) Project. The Association fosters the dancing, music, singers and painters of West Bengal, organising exhibitions, concerts, performances and festivals.

The Cultural Paths Association sponsored the exhibition SINGING PICTURES. THE SINGING WOMEN OF THE INDIAN TRADITION, held in 2012 at the WOW Museum-Comics Space of Milan.

The non-profit Association was founded in 2012 in Milan, with the aim of bringing together and promoting the dialogue between different cultures by organising exhibitions, meetings and exchanges.

The name Cultural Paths wishes to suggest the image of paths, of different cultural trails that, intertwining, generate new culture. The intent is to revitalise ancient roots of differing aesthetic Traditions and engender a dialogue between them and those of Modernity.